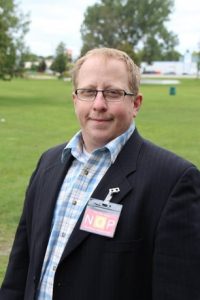 Born and raised in Nipissing district, Trevor’s grandfather was the founder/owner of the Northern Ontario courier company for over 30 years “Road Runner Express” based out of North Bay and serviced a lot of the remote places where others would not go. It was very much a family business and he believed in treating EVERY customer as family as well. Trevor spent a lot of time with his father, John Holliday, on his routes.

When the business was sold shortly after Trevor’s grandfather’s passing, Trevor was constantly working in the service and customer service industries. Trevor is a graduate of Canadore College Police Foundations out of North Bay. Trevor is a father of 5 children who want a very prosperous future for his children and hopefully grandchildren here in Northern Ontario. He is a motor coach operator for Ontario Northland which brings him back to his roots of serving the people of Northern Ontario. Northern Ontario flows through his veins and the passion for making Northern Ontario stronger than ever is second to none.

In Jan 2016, he created a petition calling for Northern Ontario to become its own province collecting around 4,500 signatures. A few months later Trevor met Edward Deibel (Party Founder and Leader at the time) and discussed joining the NOHP (Northern Ontario Heritage Party). Trevor then joined the party and once Edward Deibel retired as Party Leader, Trevor was appointed to the position. His passion fired up more than ever and the foundation, party name, and party direction was put into place, re-establishing the party as a voice for Northern Ontarians.

Trevor worked diligently as the Leader of the NOP, guiding the party through the 2018 Provincial Election, where they fielded 10-candidates for the first time. Obtaining 1.65% of the popular vote across Northern Ontario, the party made large strides toward being recognized as a legitimate option for Northerners. In 2019, Trevor resigned his position, making way for a bilingual leader to take his place — something he feels is vital in to properly represent those across Northern Ontario. Trevor continues to work as a Party Director and currently holds the position of Interim Vice-President.