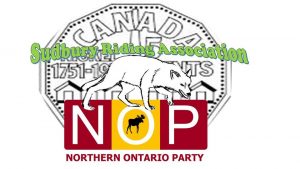 Sudbury is a provincial electoral district in Ontario, Canada, that has been represented in the Legislative Assembly of Ontario since 1908. It is one of the two districts serving the city of Greater Sudbury.

Sudbury was given its own riding provincially in the 1908 election, when the former riding of Nipissing West was divided into Sudbury and Sturgeon Falls. It initially included a large portion of the Sudbury District; in 1952, the boundaries were narrowed significantly to include only the city of Sudbury, the geographic township of McKim and the town of Copper Cliff. The rest of the original Sudbury riding was incorporated into the new riding of Nickel Belt. The riding of Sudbury East was additionally created in 1967.

Federally, however, the city remained part of the Nipissing electoral district until 1947.